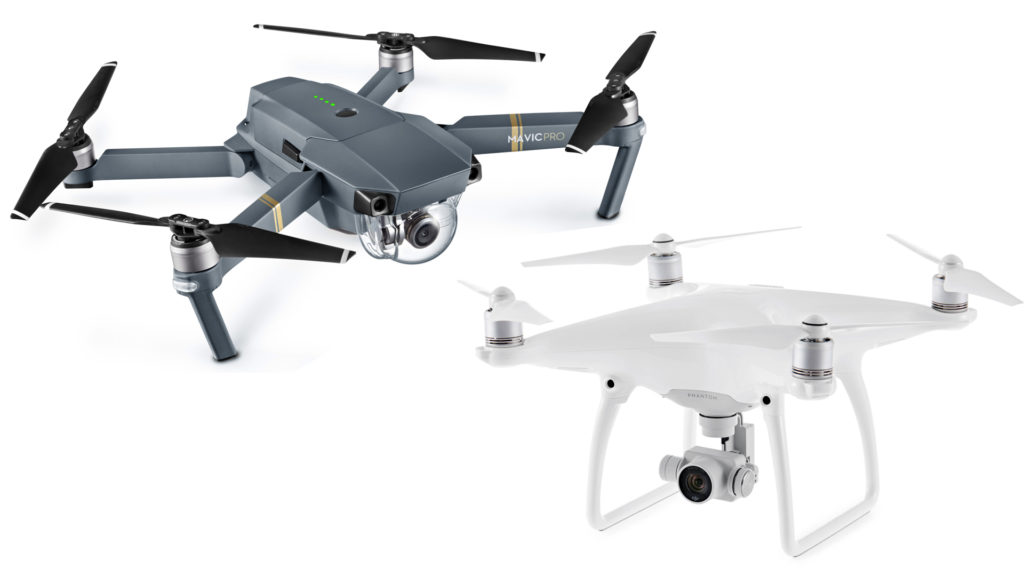 These two products are chock-full of brilliant options and features that will take your love for drones, whether it be a hobby, work, or both, to a whole other level.

They both give you sharp high-quality photography and videography through their robust built. And although they resemble each other greatly, they differ just as much and that’s what this article is about.

Not the fact that one of them is ultimately better than the other, as in the end such a decision will always remain a matter of preference and needs, but just highlighting what each one of them can offer you.

This is an important point because a drone needs to be portable and lightweight in order to achieve the efficiency that the device was originally built to achieve. The Mavic weighs 2 pounds, while the Phantom weighs 3 pounds.

Such a difference might be too little to notice but when you are carrying a lot of equipment and moving from one place to another, 1 pound might make a world’s difference to you.

Another thing is that the Mavic is designed to be folded which increases its portability exceedingly while the phantom is stable in its form.

The build of the Phantom is a lot sturdier and more durable. You can crash it quite a few times and it will still give you 100%. Although this is not a downside for the Mavic, the Phantom just feels more robust.

Essentially, both devices are great for beginners, everything is easily learnable and the learning curve is quite smooth.

However, the Phantom comes with a lot of options regarding its movement and control, that we are going to discuss momentarily, that give a sense of safety and confidence for beginners, who might worry about ruining such an expensive device.

The phantom here has excelled in providing a variety of options in order to suit everybody’s needs.

First, the basics, this drone has a 30-minute maximum flight time, and a 72-km/h maximum flight speed. Moreover, courtesy of the OcuSync 2.0, it has a maximum transmission distance of 8km. This trifecta gives you all the time that you might need to shoot and reshoot to get that perfect product that you want.

Still, it does not stop there, you will not be wasting this valuable time trying to weave your pathway through trees and buildings as the phantom has been designed with two rear visual sensors, forwards and downward sensors, in addition to the infrared sensors placed on its sides.

Additionally, it has a return to home function which puts you at ease when using your drone in new unexplored territories. If the transmission signal is cut or lost for any reason, the drone, by itself, will return to its takeoff position.

The Mavic on the other hand beats the Phantom’s flight time by a difference of one minute as it provides you with a 31-minute flight time. It also enjoys the same OcuSync 2.0 which provides a great connection up to 8 km plus a maximum flight speed of 72 km/hrs.

Before your Phantom returns home, you can use it with its three active rack options which are profile, spotlight, and circle modes.

You can use the TapFly mode or Draw mode. The first allows your drone to move in reverse which can produce picturesque media, while the second allows you to draw a certain route on the remote controller and the Phantom will move in the specific route.

As for the remote controller, it is quite revolutionary, due to its 5.5 inch 1080 pixel LCD screen which displays everything that we have mentioned above on the DJI Go 4 app which comes preinstalled on the remote controller. This eliminates the need for you to waste your cell phone battery,

Nonetheless, one thing that the Mavic houses that the Phantom lacks is it’s ActiveTrack 2.0 Technology, which takes the entire bundle to a whole other level. It provides precise recognition, high speed tracking, obstacle sensing, and trajectory prediction all together.

The integration of all of these features together is the cherry on top. Last but certainly not least, the Mavic is built with omnidirectional obstacle sensors on all sides of the aircraft, which boosts it’s safety quite a few notches.

Internal storage is a definite win for the Mavic, as it comes with 8 GB of internal storage. So, if you find yourself without your SD card, the Mavic will have your back.

Unfortunately, the same can’t be said for the phantom as it comes without internal storage. Hence, you always have to pay attention to your memory cards.

The frame rate is the first difference that we will see here. The Phantom can give 60 fps, while the Mavic can only reach 30 fps. Thus, if you’re going for slow motion mode, then the Phantom will be a great ally.

As for the depth of the colors produced with these aircrafts, the Mavic gives a 10-bit Dlog-M color and a new HDR profile, while the Phantom comes with an 8-bit color. This means that the Mavic has a broader spectrum to work with.

Still, this does not automatically translate to In-Camera color as the Phantom manages to give a richer, more detailed final product, while the Mavic leans into producing a warmer image.

Although the Phantom can go all the way up to ISO 6400, it is not recommended to use it with such a setting, as the footage is not usable anymore. Surprisingly, if you bring it down to ISO 1600, which is the maximum of the Mavic, it loses to the Mavic, which manages to create a sharper output.

The phantom comes with a mechanical shutter, which we do not see quite often. This of course provides for a hassle-free experience. Plus, it gives artists the chance to  capture high-speed vitality with unprecedented accuracy.

Put that next to an adjustable aperture of F/2.8-F/1, a 1-inch CMOS sensor, 20 MP images, 14fps burst shooting mode, and you will have magnificent output in your hands.

Mavic does not come to this category empty handed, as it brings with it the Hyperlapse mode. This mode allows you to enjoy four different shooting options, plus automatic focus and image stabilization during post processing, which for anyone involved in the field, will be a godsend.

Still, it does not stop there, as it boasts QuickShots like POI 2.0 and Waypoint 2.0 which further broaden the available modes for panoramas.

To sum it all up, we will state that the final decision will always remain a matter of your very own wants and needs. Our advice is to prepare a checklist of what you desire in your own aircraft, and see which one of these two will check more boxes.

The Mavic is lighter, more portable, has a longer flight time, ActiveTrack, Hyperlapse, and 8GB of internal storage.

On the other hand, The Phantom enjoys a more robust body, return to home function, Tapfly and Draw flying modes, a built-in LCD screen in the remote controller, and 60fps.