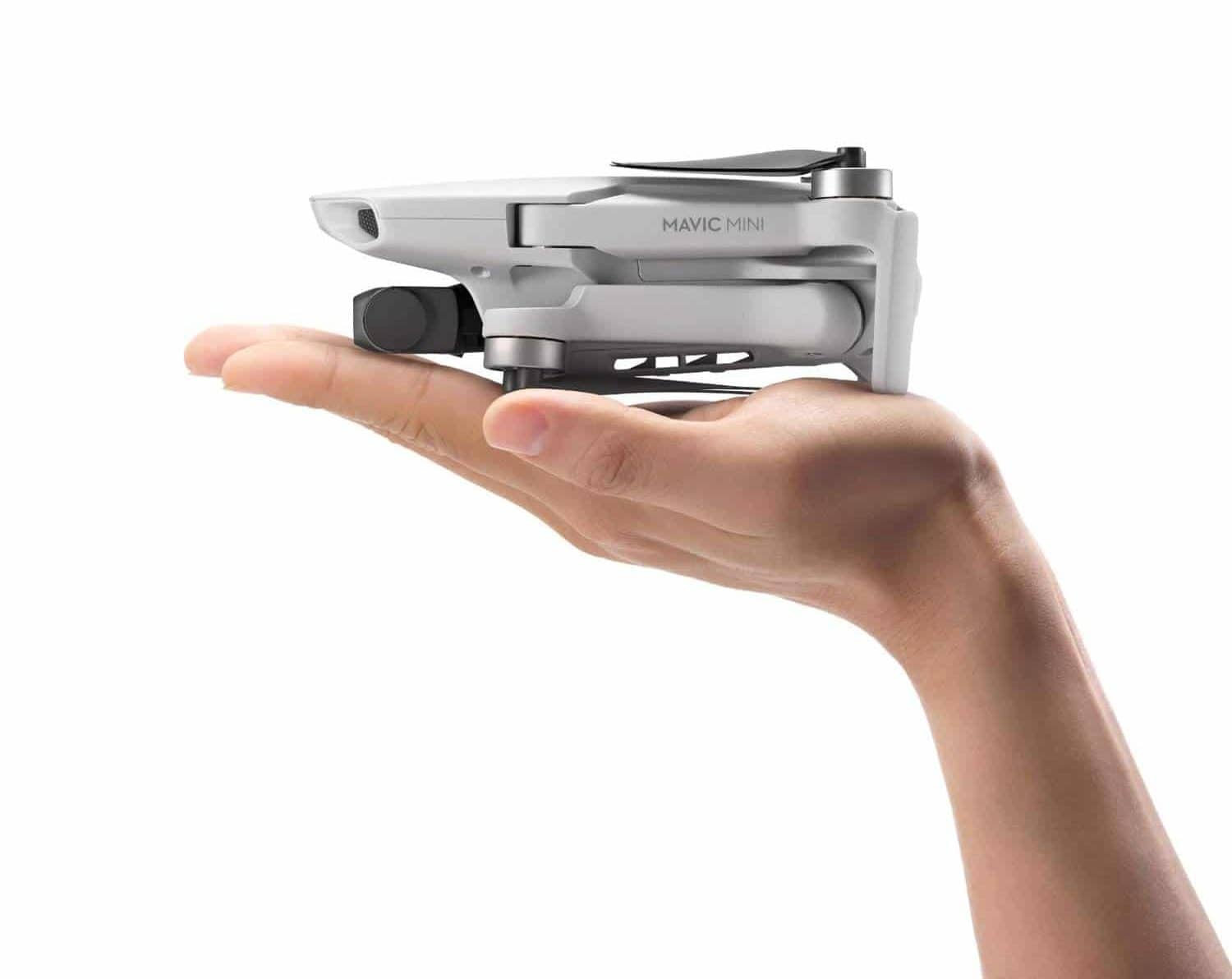 The process of creating a mini drone is harsh and time and effort consuming, let alone putting a considerable amount of cool and useful features into that drone. Nonetheless, that’s exactly what DJI has achieved here with the Mavic Mini, a palm-sized drone capable of great things.

Throughout this article, we’ll explore this fantastic drone together to find out what makes it tick and what are its best features.

A mini drone at heart, the Mavic Mini is about the size of your palm, and can easily fit in your pocket. It has almost thirty minutes of flight time, packs an impressive camera that shoots footage at 2.7K, and doesn’t require any form of registration.

However, as we all know, no product comes without flaws or downsides. Its small size makes it hard to follow it in the sky, only has a USB-A charging port, and finally, it lacks an ActiveTrack mode.

Fits in Your Palm

True to its name, the Mavic Mini is so small and compact that it fits in your palm and your pocket as well. When folded, it comes only at 5.5 x 3.2 x 2.2 inches making it extremely small. It also weighs just 8.87 ozs.

During takeoff, its weight will change to 249 grams. This means that you won’t need to register it. As the Federal Aviation Administration states that any unmanned aerial vehicle that weighs from as low as 0.55 pounds all the way up 55 pounds must be registered. The Mavic Mini evades the process of registration by a literal gram.

The battery can be removed and stored in the rear compartment. To turn on the drone, you’ll find the power button on the bottom. Press it once and then quickly press it again and hold it till the drone starts to emit peeps.

When it comes to the microSD, where you’ll store all your images and videos, you’ll find its slot alongside the micro USB port below the battery door.

This drone uses lithium-ion batteries, which provide it with an average flight time of 30 minutes give or take. However, you should always put the weather conditions into consideration, as strong winds and higher temperatures will drain the battery faster. It’s always recommended to avoid using a drone on windy days, let alone a mini one.

It can elevate up to 1,600 feet and has a range of 2.5 miles. Even though these numbers are less than other DJI drones, they are wonderful considering this is a mini drone.

The Mavic Mini has three flight modes; they are: regular, sport, and cinesmooth. However, switching between these three modes is not easy, as you’ll have to do it through the mobile application.

To install the applications, you’ll need IOS V10.0 or better and Android V6.0 or more. Trust us, you’ll need the app; it is vital in changing between the three flight modes, allows you to create cinematic shots, and has a flight tutorial. The flight tutorial really comes in handy as it will show you everything you’ll need to know in order to pilot your drone easily.

The remote control comes with the drone and its design is amazing. It’s comfortable to hold, use, and the grips don’t make your hands sweat.

You can remove the joysticks and store them inside when not using them. The left stick controls the drone’s altitude and rotation, while the right one moves the drone in all four directions.

The left shoulder contains the record button, while the right one has the photo button. On the left, there is a control wheel used to adjust the camera’s pitch. Nonetheless, you cannot adjust the brightness through EV compensations. You’ll have to do it through the application, just like the flight modes.

Also, there are clips at the bottom to secure your smartphone, which you’ll need to insert into the controller and install the application on it to see the view from the camera.

The camera has a 24mm lens with a fixed f/2.8 aperture and the CMOS image sensor is capable of shooting 12-megapixel still images. However, it only provides JPEG images. Moving on to video footage, the camera shoots videos at 2.7K/30fps (frame rate per second), which is more than enough for a mini drone. The camera is quite impressive. Even though it lacks the ability to shoot 4K footage, it provides astonishing quality for its price.

What’s in the Box:

If you opt for the Fly More Combo, you’ll also receive:

The DJI Mavic Mini has a total of 1510 ratings on Amazon, with an overall score of 4.5 out of 5. Its camera, small size, foldability, remote control, and battery life receive a lot of praise, but the application and not being able to see it in the sky received some criticism.

The DJI Mavic Mini is a fantastic mini drone. It easily folds to fit into your palm, doesn’t require any form of registration, has a 30 minutes fly time, comes with its remote controller, and has an impressive camera. If you need a mini drone, the Mavic Mini won’t let you down.